I was sitting on the deck this evening....enjoying the hummingbirds and their territory war. You'd think that with three large hummingbird feeders there would be enough for all, but not according to the older male....he thinks they all belong to him.
I heard a familiar call and looked up to see two Common Nighthawks cruising over. I snapped a series of shots and about 20 of them were sharp. Here's a stacked image of 7 of them.... 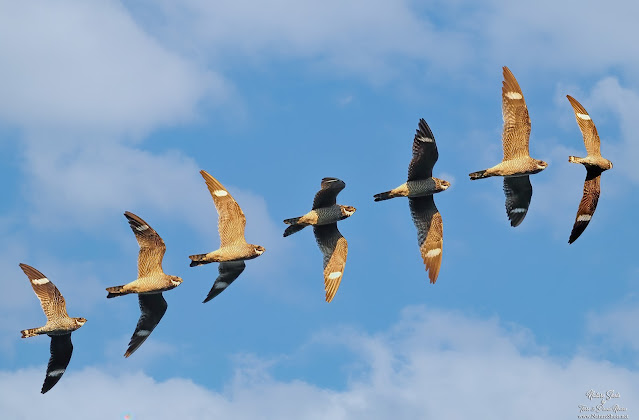 I was recently recalling that when I grew up not far from our home, it was commonplace to see large flocks of Nighthawks each evening. I could clearly hear their calls and identify them by the white wing bands.
While I do still see them, they are uncommon, and then only single birds or just a couple. The Nighthawk numbers have declined, and All About Birds cites that the decline of Common Nighthawk populations declined by over 1% per year between 1966 and 2019, for a cumulative decline of about 48%, according to the North American Breeding Bird Survey." A reduction in flying insect populations related to pesticide use is thought to be one of the causes. In addition, Nighthawks nest in gravel patches...including those that used to be common on flat rooftops. The move to avoid the gravel in leu of rubber roofs has led to decreased availability of nesting sites.